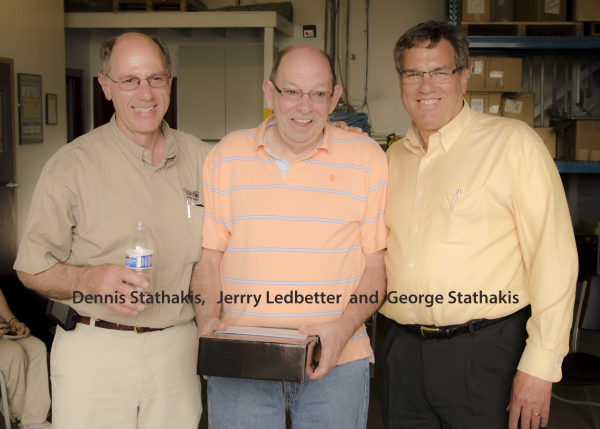 Jerry Ledbetter has been a painter for over forty years. Nearly fifteen of those years Jerry has spent here at Stathakis where he recently retired as a Painting Supervisor. Why so many years spent in an industry that many people drift in and out of? As Jerry himself said, “I like to paint, it’s that simple. I’m an outdoors kind of guy and during the warmers months, much of the work is outside, a great place to get your work done right?  The only thing better than that is retirement.” And so Jerry is finally enjoying his retirement, the culmination of four decades worth of hard work and of course, everyone at Stathakis wishes Jerry nothing but good things.

Jerry Ledbetter has been with the Stathakis family for 14 years. Chris Stathakis had this to say about Jerry, “Jerry is a guy with real integrity, he is honest and he looks out for the customer. It’s not very often that we run across someone as special as Jerry. I wish we had ten more just like him. We know he’s looking forward to retirement and we want him to enjoy it, but he will really be missed.”

So why would a guy who has the work ethic and know how to get many jobs in many places, stay here at Stathakis, you might wonder. “I really like working for a family organization. Dennis, Chris and George, they treat me like family and I like that. I’ve been painting for 42 years and Stathakis is the best company I have ever worked for hands down. When I first met with George about joining Stathakis, he asked what I wanted out of the job, I don’t think I had ever been asked that before. I told him I wanted to work for a good company that I could retire from and that’s what I did.”

During his years at Stathakis, Jerry witnessed many changes. As Jerry himself notes, “When I started we had maybe ten accounts, one or two major painting accounts and I’m not sure we even had any building maintenance accounts. Now we have over 400 employees and Stathakis has really grown into a force in our industry and a very good place to work. George, Chris and Dennis have grown Stathakis the way they have because of how they treat people, customers, employees, all of us. Those guys didn’t miss opportunities, they found good people and we did our jobs.”  George Stathakis is happy for Jerry but sad to see him go, “Jerry is a part of why Stathakis was able to grow the way it did. Jerry was the kind of guy I could really count on. We all want to be the kind of person that really comes through when you need it but really, only a handful of people really come through for you time and time again.”

While Jerry appreciated the family nature of the business and had the opportunity to grow with the company, certainly there are things he won’t miss.  “Well, the hours could be challenging but it comes with the territory. Sure the winter months of leaving for work when it was dark out and driving home in the dark weren’t my favorite, but it balances out when I think about the time I got to spend outdoors working with the sun on my face. And I got paid to do something I really like to do, not everyone can say that.” 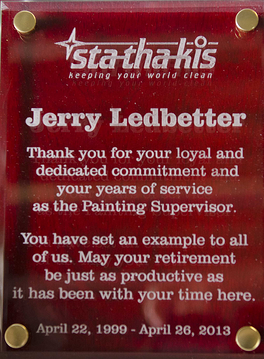 “Jerry worked hard as a painter and then as a painting supervisor and he left his department better than he found it. He really likes painting and it shows in his work and the attitude he brought with him every day,” said Dennis Stathakis.  Jerry liked the company he worked for and liked the work and just maybe that is the magic recipe for a long and fruitful career. “I like painting, it’s good work and the work changes you know, a different day, a different job.” All of us here at Stathakis wish Jerry many wonderful days ahead, relaxing and enjoying all that Michigan and beyond has to offer. Jerry will definitely be missed here at the office and on the job but we are grateful that he was and will continue to be counted upon as an MVP here at Stathakis and part of our family.

What will Jerry do now? He’s looking forward to sleeping in once in awhile and getting more use out of his Jet Ski. He’ll have more time to camp, fish and spend time with his wife Sandy and their Yorkie and Poodle. Jerry says he won’t miss the hours and is of course looking forward to more free time, but he will miss his conversations with Dennis and the chances he had to catch up with the janitorial staff who he saw coming in as he was usually leaving. What advice does Jerry have for people thinking about entering the painting or building maintenance field? “Be cordial to everyone, do your job the best you can and then let it go, it will all fall into place if you just do that.”

Thank you Jerry for everything you have done for Stathakis!